There is a new TV show on Showtime called Shameless. I haven’t seen it yet but there is an actress that bears an uncanny resemblance to Angeline Jolie. Emmy Rossum. I don’t have the script, nor do I have one in the works—but I see a dressed down Jolie struggling with the harsh reality of life…stay with me, stay with me… She had Rossum at a very young age (15? 16?) They are about eleven years apart in age (I know—Jolie is only 35 years old. I kind of threw up in my mouth a little when I read that) so it is plausible that they could play mother and daughter. How hard is it to add or subtract a few years on film? 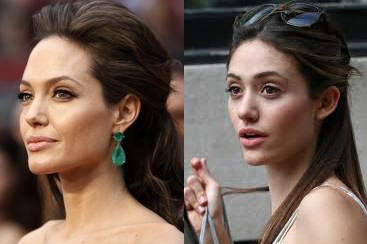 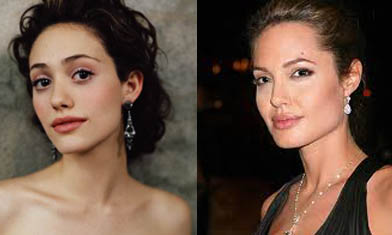 SO she had her daughter young and sacrificed her future to raise this kid on what little she could make working in some small town…or big city. I like big city better. It might be interesting to see a young mother commuting in from an affordable outer borough neighborhood to work in Manhattan. With Jolie’s acting chops she could pull off a powerhouse women’s rights activist character but maybe this movie will break her into lighthearted dromedy.

So the daughter gets into college and is moving away—so we have the empty nest thing compounded with the older woman with no real career or education-thing. There are so many movies where the heroine is older and finds herself alone again with no man. In this case there was never a man but in other films of this genre there is a divorce or death—or even a husband but since the mother usually always sacrifices her independence and career for her children, when they’re gone she is thought of as empty or alone—having lost touch with her spouse, they rekindle their romance again…THIS IS NOT THAT MOVIE! This needs to be about a middle to lower income woman figuring it out. Humbling Jolie will build a trusting and devoted female audience. She’s already viewed as a man-eating husband stealer—doesn’t she want us to like her? (Clearly not, she already admitted to having no female friends) ANYWAY…

I know she’s already tried rom-com with that epic failure of a movie, Life or Something Like It, but this will be well thought out. I’m seeing a realistic Nancy Meyers film. It could be funny, it could be heartfelt, is could be sad, it could be all of those things but the characters in Meyers films are all rich or successful or affluent or privileged in some way—or all of the above: Private Benjamin, Baby Boom, Something’s Gotta Give, It’s Complicated… The characters in these films are women with relatable personalities but honestly, who cares about the problems of the rich? Take Something’s Gotta Give: the heroine, Diane Keaton (who I love) is a celebrated playwright who falls for the wealthy businessman Jack Nicholson (he dates models young enough to be his great-granddaughters) and an emotional whirlwind ensues. It’s Complicated, although funny and stylish—still focuses on the “problems” of the thriving and wealthy few…who do not fill the theaters on opening weekend, I might add. I understand wanting to have escapism at the movies. I like the fantasy. I like Nancy Meyers movies. But I kind of want some reality. I know more women who worked their asses off alone and raised successful ambitious daughters who subsequently make wonderful successful lives for themselves…and where’s mom? Mom is still alone punching a clock.

Oh my, I think I’m going to cry. Is that what you’re thinking, too? BANG! BOX OFFICE GOLD!

I’m just looking for a way to like Angelina Jolie again and I think moving her away from firearms and into a family might do the trick. I recently watched A Mighty Heart and I want more of that actress and less of the woman in Wanted… You can’t be the bad-girl forever… I kind of want to see her be funny and inviting and relatable.

Looks like I’ve solved another problem of the rich and successful… Hey, wait a minute…

This entry was posted in NOTES. Bookmark the permalink.